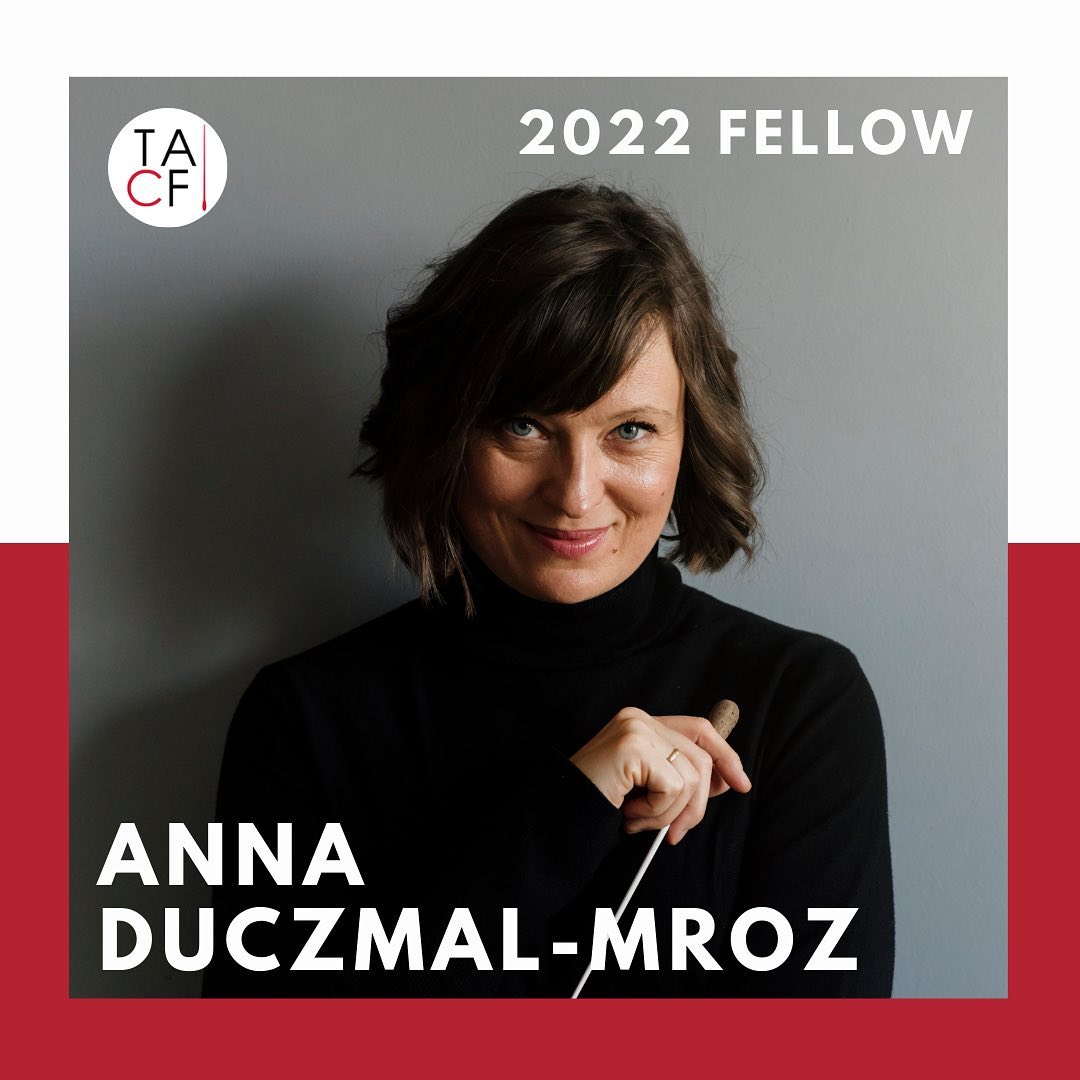 Anna Duczmal-Mróz is the Fellow of Taki Alsop Conducting Fellowship 2022-2024.

Polish conductor Anna Duczmal-Mróz has been principal conductor of the Amadeus Chamber Orchestra of the Polish Radio since 2009 with which she regularly performs around the world, record  Polish music and her concerts have been broadcast by Polish Radio. This extraordinary ensemble was originally founded by her mother, ground-breaking conductor Agnieszka Duczmal, in 1968.

Anna Duczmal-Mróz is a great propagator of Polish music during concert in Poland and abroad, on record companies  and on radio stations around the world.  She is a creator of the world’s first 5-disc series of  all chamber symphonies by Mieczyslaw Weinberg  witch were recorded for  the German publishing house CPO and Polish DUX and was appreciated by critics in Poland, Germany, France and Spain. The album recived the Spanish award of the Scherzo Magazine – “Exeptional” and brought 3 nominations for Fryderyki Award and ICMA Award (2020).

Anna Duczmal-Mróz is an author of an article about M. Weinberg’s symphonic music in the Spanish Music Magazine Scherzo.

In 2018, as music director, she prepared the premiere of contemporary opera “An adventure in Recco or Tree of freedom” by Maciej Małecki to the libretto of Wojciech Młynarski  in Opera Nova and the premier of  F. Mendelsohn’s “Midsummer Night Dream” balett in Baltic Opera in Gdańsk.

Anna Duczmal-Mróz’s recordings  also include albums recorded with Polish Radio – Amadeus Chamber Orchestra: an album with Sebastian Krajewski’s music recorded  for DUX in 2015,  Astor Piazzola’s LIVE concert with Wiesław Prządka – bandoneon and Kazimierz Serocki’s – Sinfonietta for two orchestras in 100/100 Project – Fryderyki Award. Cooperation with Capella Bydgostiensis resulted in burning the cd for DUX – ” Best of the twentieth century ” under the auspices of the Krzysztof Penderecki European Centre for Music.

In 2009-2016 she gave masterclasses together with the Torun Symphony Orchestra and the great pianists such as Ilya Scheps , Robert McDonald, Andrzej Jasinski  in Paderewski Piano Academy.

Anna started her music education as a violinist. Her conducting talent was discovered during the student orchestra rehearsal at the Hochschule für Musik und Theater in Hannover, where she was studying violin with Prof.Krzysztof Wegrzyn. The conductor of the orchestra, Eiji Oue, suggested that orchestra members volunteer to take his place at the podium and conduct the orchestra. As a result of this experiment- “competition”, Anna was invited by Maestro Oue to study conducting with him (2001-2004).In 2000 she founded a student orchestra-Benjamin Britten Kammerorchester in Hannover with which she was giving concerts in Germany. In June 2004 she graduated with honors and conducted NDR Radiophilharmonie Hannover on her diploma concert.

Anna Duczmal-Mróz is a multiple holder of scholarships of Ministry of Culture and Fine Arts.

[...]The success was the work of conductor Anna Duczmal-Mróz, who had dreamed about performing this piece for many years. And finally she did.With increasing frequency, I take note of the impressive versatility in Anna Duczmal’s musical personality, which yields truly excellent results. The conductor is fond of details – she links the success of the macro form to nuances. This is perceptible, in particular in these difficult phrases with abrupt rhythm changes; the artist is very attentive, and she can ensure appropriate rubato. Anna Duczmal-Mróz passed this difficult exam with a distinction. The conductor deserves such a high score first and foremost due to her creation of appropriately dramatic, yet not overcomplicated tension in the last movement in the work. It is possible to show little creativity with regard to the first three movements of Mahler’s Symphony No. 1 – in the worst-case scenario, the audience will start to fidget. However, a step in the opposite direction always leads to a fiasco. The last movement of the symphony is an extensive finale – full of drama and containing reminiscences of the first movement. This largely extensive element aims to summarise the work and is full of deceptive cadences and surprising twists of musical drama. This is why the expressive and consistent vision created by Anna Duczmal-Mróz on the basis of an interplay of contrasts produced a most satisfying outcome. Well done, I hope to see a disc release of this performance!

"... Anna Duczmal-Mróz really sensational conductor ...." ... Polish conductor delightfully debuted with the BochumerSymphonikern at the end of the 12th Festival Kissinger Winterzauber ... despite her young age (30) is amazingly ready and resolute conductor. She is technically flawless, she conducts very focused, precise, renounced any vague gestures and has a clear picture of how she wants to lead the orchestra. She really can lead the orchestra and doing it so discreetly that the musicians willing to follow her "... (S.Prokofiev - Romeo & Juliette Suite) ... "Anna Duczmal-Mróz perfectly builds tension and can maintain them, can achieve strong emotional contrasts, finds surprising turns, she does not focus on superficial effects, but earlier calms the tempo to strengthen the intensity ..."

"Divine interpretation delighted with the richness of sound, colors and articulation (string quartet in F major" Ravel / arr. Anna Duczmal-Mróz). I had an impression that a handful of musicians on stage have joy of playing this beautiful music, and Duczmal-Mróz extract the fore the most beautiful motives. " "The Albéniz score hides much more than just a melody, which perfectly knows Anna Duczmal-Mróz. The orchestra conducted by her from the very first sounds enthused noble sound. "Asturias" magnetic by rhythm and precise articulation, evocative drama, and above all the subtle, yet some clear modulations character of the music. "

"Anna Duczmal-Mróz, along with the musicians of Amadeus Chamber Orchestra of Polish Radio extracted color depth and a wide range of moods. How many in this playing was breathing, how many beautiful and colorful  phrases, ornate beauty of the melody! " "In the interpretation of Anna Duczmal-Mróz struck above all sense of  Haydn style , manifested in the skillful reading all the nuances of the score ... Great interpretation of Joseph Haydn Symphony No. 44, was just the overture to a true display of musicality…”

" In M.Weinbers 10th Symphony for string orchestra Duczmal mother passes the baton to his daughter Anna. This symphony is more modern than the other works, and is more nearing to Shostakovich. Anna Duczmal inspires the orchestra , with extraordinary clarity and wonderful nuances , but also play a charged voltage. There is no doubt that Apple has fallen here, not far from the tree or the baton from the podium . "

" Presented here works for string orchestra shows lyrical and expressive sound, but there are also power and drama ... The orchestral sound is      "juicy " and in the low registers with a richly -sounding energy , slender in the fast movements , but also fragrant elegance ... This record is ideal to find his new friends. "

"On one side, the legendary trumpeter Wynton Marsalis and the Jazz at Lincoln Center Orchestra, on the other, the reliable Anna Duczmal-Mróz and the Polish Amadeus Chamber Orchestra. Together they took over the UAM Concert Hall, proving that from classics to jazz there is a short way to go and good cooperation is also complementing each other."

"The first part of the concert was great, during which the orchestras presented the famous" Pictures from the exhibition "by Russian composer Modest Mussorgsky, performed not only by the richness of colors but also by the ingenious joint development of the Polish-American" big band ". The result was a lively dialogue in completely different, clearly contrasting languages, because when one miniature could put the listener in a pensive melancholy melody, carefully graded tension and suggestive play of the string section "Amadeus", the second always marked the energetic hit of Jazz at Lincoln Center Orchestra in a classic style in the sixties, of course, in which the greatest role is played of, of course, wind instruments: the deafening "growl" of trombones or "jungle sound" trumpets with mufflers. The cherry on this magnificent cake was playing the last part of "Pictures"- monumental and the full splendor of the "Great Gate in Kiev." It was, however, only the beginning of the feast. After a short break, the musicians moved the audience into completely different regions - much more appropriate for the elemental improvisations of individual members of the Marsalis orchestra. Their first announcement was the composition of "After You`ve Gone" from 1918. The Amadeus Chamber Orchestra played the leading role in it - played subtly, unobtrusively, but with the vigor so necessary in the case of this composition. American jazzmen's performances began with the presentation of selected works by Duke Ellington. In the Jazz at Lincoln Center Orchestra, they turned out to be a pretext for spectacular solos that met with exceptionally spontaneous reactions from the audience. " Sebastian Gabryel   www.kulturaupodstaw.pl

"A great art of contrasts"

"Polish conductor Anna Duczmal-Mróz, a 2022-24 Taki fellow, seemed completely at ease leading Montgomery’s work, effectively communicating with facial expressions and an animated left hand to go along with the main beat provided by the right. With expansive gestures, she urged the orchestra forward when the music gained momentum and drive. In short, she acquitted herself well in what was clearly a major opportunity to show off her skills."
by Kyle MacMillan
https://classicalvoiceamerica.org/2022/08/03/barrier-breaking-alsop-hands-baton-to-women-in-a-festival-showcase/

"Of course, merely providing push, exposure and guest conducting opportunities won’t amount to much if the talent to go the distance isn’t there. And in that respect Alsop appears to have chosen well with her new and recent mentorees: the 2022-24 Taki Alsop conducting fellow Anna Duczmal-Mróz, along with alumnae Laura Jackson and Jeri Lynne Johnson, each making her CSO debut on Friday.
A native of Poland who heads that country’s Amadeus Chamber Orchestra, Duczmal-Mróz got her Ravinia moment at the top of Friday’s program, which held the first CSO performance of Source Code by Jessie Montgomery, the orchestra’s current composer-in-residence.
The trouble with the string-ensemble version heard on Friday is that the affecting intimacy of expression of the original is sacrificed to creating a fat, rather amorphous string sonority—something essential feels missing. That said, Duczmal-Mróz’s clear beat, vigorous body language and fluid control worked to accentuate the positive, resulting in a fervent reading. Her career progress will bear watching."
By John von Rhein
https://chicagoclassicalreview.com/2022/07/women-conductors-spotlighted-in-alsops-breaking-barriers-festival-at-ravinia/